GET IT NOW
SUBSCRIBERS

Lucky Ones Win $10 Off Coupon

or continue with social networks

or continue with social networks

Amazon's New World "Fresh Start" servers are now live and to celebrate, you can now buy the MMO for 50 per cent off the usual retail price on Steam. A big array of updates to New World has brought a surge of renewed player interest and positive sentiment for Amazon's MMO.
Whilst the "fresh" part of the moniker suggests this is a deal that should primarily interest lapsed players, Amazon indicated that the new servers will offer old and new players a chance to completely restart their New World experience as pre-existing high-level characters cannot be transferred in, and a great opportunity for new and lapsed players to experience all that has changed over the game's first year. 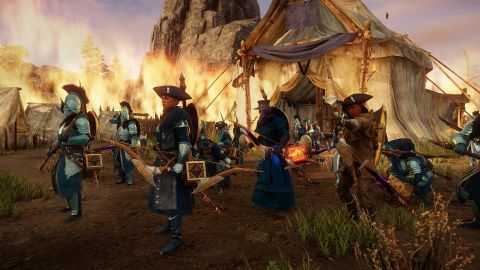 New World launched in September 2021 as one of the most popular games in the history of Steam, with a concurrent player peak of 953k users, the seventh-highest ever recorded on the platform. But over the course of about six months, those player numbers dwindled dramatically, down to daily peaks around the 30k range, which is still a sizeable population for a live game, to be fair. But a range of exploits and technical issues drove many players away, and the slow rollout of new content wasn't enough to bring them back.

But on October 17, 2022, New World implemented its Brimstone Sands update (opens in new tab), introducing a massive new zone, a completely revamped experience for new players, and more. On November 2, the devs introduced Fresh Start Worlds, a way for new and returning players to get in on the ground floor of untouched servers.

The new version is made for plyers to enjoy a completely revamped early game experience, new weapons like the Void Gauntlet and Blunderbuss. Less travelling now that early quests have been grouped together with "easier" levelling experience, meaning less grinding and a huge improvement to the overall pacing. On the other hand, you can also use New World Coins as main currency for your trading activities, for many different new items.
Amazon Games recently celebrated one whole year of New World with a snazzy new infographic that showcased "key highlights from the launch", including confirmation that at the time of its anniversary, New World players had collectively clocked up 569m in-game hours.

Meanwhile responses from all the new and returning players in the wake of the recent changes are very positive, too. Literally, recent Steam reviews show a 'very positive' rating, compared with the game's 'mixed' response from earlier players.

Amazon Games recently celebrated one whole year of New World with a snazzy new infographic that showcased "key highlights from the launch", including confirmation that at the time of its anniversary, New World players had collectively clocked up 569m in-game hours.

It remains to be seen, of course, if New World will keep these players around for the long haul. But the interest in these recent updates does suggest that the MMO has found a solid foundation to bring players back.

Next: Updates on New World Bring More Possibilities to the Game
Previous: How to Make the Musket and Rapier Build in New World